Every four years, the Van Cliburn International Piano Competition convenes the most promising rising star pianists from around the world for 17 days of intense competition.

The winners of this year’s edition, its fifteenth, will be chosen on June 10, 2017 in Fort Worth, Texas. Less than a week later, the gold, silver, and bronze medalists will come to The Greene Space at WQXR for their first public appearance as winners. WQXR’s Elliott Forrest hosts this special evening of music and conversation.

Established in 1962, the Van Cliburn International Piano Competition is widely-recognized as “one of the world’s highest-visibility classical music contests.” Winners are chosen by an esteemed panel of judges and awarded significant cash and other prizes, as well as three years of comprehensive career management and concert tours. Previous laureates include Radu Lupu, Olga Kern, Joyce Yang, Haochen Zhang, and Vadym Kholodenko. 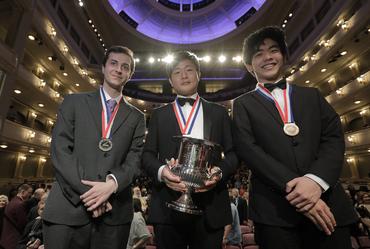 Yekwon Sunwoo earned his bachelor’s degree at the Curtis Institute of Music and his master’s at The Juilliard School, and also studied with Richard Goode at the Mannes School of Music. He currently studies under Bernd Goetzke in Hannover. Mr. Sunwoo won first prizes at the 2015 International German Piano Award in Frankfurt, the 2014 Vendome Prize held at the Verbier Festival, the 2013 Sendai International Music Competition, and the 2012 William Kapell International Piano Competition. He has performed with the Juilliard Orchestra under Itzhak Perlman at Avery Fisher Hall, Baltimore Symphony Orchestra under Marin Alsop, Houston Symphony Orchestra, National Orchestra of Belgium, Sendai Philharmonic Orchestra, and others. He has given recitals at Carnegie Hall, Hamarikyu Asahi Hall in Tokyo, Wigmore Hall in London, Radio France and Salle Cortot in Paris, and Kumho Art Hall in Seoul. Mr. Sunwoo has been featured on WQXR’s McGraw-Hill Young Artists Showcase, and has performed chamber music for the Chamber Music Society of Lincoln Center, with Ida Kavafian and Peter Wiley as part of Curtis On Tour, and with Roberto Diaz on the Bay Chamber Concerts.

A native of Minneapolis, Kenneth Broberg studied piano from age 6 through high school under Dr. Joseph Zins. He continued his studies with Nancy Weems at the University of Houston’s Moores School of Music, where he earned a Bachelor of Music degree. He is now a graduate student working with 2001 Cliburn gold medalist Stanislav Ioudenitch at Park University in Parkville, Missouri. Mr. Broberg has won first prizes at the Hastings and Dallas international piano competitions, in addition to medals at the Sydney, Seattle, New Orleans, and Wideman (Shreveport) competitions. Several of his performances at last year’s Sydney International Piano Competition were released on CD on the Universal Music label. He has performed as soloist with the Royal Philharmonic Orchestra, Minnesota Orchestra, Sydney Symphony, Seattle Symphony, Dallas Chamber Symphony, and the Louisiana Philharmonic, among others. Mr. Broberg has had solo, chamber, and concerto performances broadcast on NPR and ABC (Australia) radio. His passions include hockey, baseball, books, and movies.

A native of the San Francisco Bay area, Daniel Hsu began piano studies with Larisa Kagan at 6. He was accepted at age 10 to the Curtis Institute of Music, where he is the Richard A. Doran Fellow and studies with Gary Graffman and Eleanor Sokoloff. In 2016, Mr. Hsu was named a Gilmore Young Artist and won the bronze medal at the 9th Hamamatsu International Piano Competition. As first-prize winner of the 2015 Concert Artists Guild Victor Elmaleh Competition, Mr. Hsu made his Carnegie Hall debut in April 2017. He made his solo debut with the Philadelphia Orchestra in June 2016, and concerto appearances this season include concerts with the Grand Rapids Symphony, New Haven Symphony, and Symphonia Boca Raton. His notable recitals include appearances at the Krannert Center for the Performing Arts; Chicago’s Dame Myra Hess Concert Series; and Merkin Concert Hall’s Tuesday matinee series in New York. Mr. Hsu also is a film buff and enjoys computer programming. He contributed to the creation of the Workflow productivity app, which won a 2015 Apple Design Award and has improved the experience of mobile devices for visually impaired users.